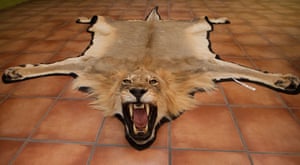 A lion skin as a trophy from a hunt in Namibia. Photograph: Ton Koene/Alamy

France has banned the import of lion heads, paws and skins as hunters’ trophies, nearly four months after the killing of Zimbabwe’s most famous lion by an American trophy hunter sparked international outrage.

In a letter to the actor and animals rights activist Brigitte Bardot, France’s environment minister, Ségolène Royal, said that she had instructed officials to stop issuing permits for lion trophies and was considering stricter controls on trophies from other species.

“Following your letter and recent visits in Africa in preparation of the climate summit in Paris, I want to let you know I have given orders to my services to stop delivering certificates for importing lion trophies,” Royal wrote in the letter dated 12 November.

“Concerning other species trophies, I am in favour of a much stronger control for hunting trophies and this issue will be discussed with all the countries concerned and with the EU.”

In July, conservationists and MEPs called for an EU-wide ban on the import o... following the death of Cecil the lion at the hands of a Minnesotan dentist near one of Zimbabwe’s national parks. France is the first EU state to implement such a ban. In March, Australia also banned their import.

Between 2010 and the 2013, the last year for which data is available, more than 100 such lion trophies were imported to France.

Lionaid, a UK-based charity that is calling for the UK to follow suit with a ban on lion trophy imports, said it was “overjoyed” by the move.

A spokeswoman said: “Within the EU, France was a major importer of such trophies and we expect that wild lions will now find themselves safer without the presence of French trophy hunters.

“We trust that France’s decision will create a domino effect within the EU and that we will soon hear about other member states joining together to say no [to trophies].”

Catherine Bearder, a Liberal Democrat MEP who led calls for a ban in the summer, said was “delighted” by France’s decision and the UK should follow its lead.

The EU’s scientific review group, which decides whether or not to blacklist trophy imports based on the sustainability of species, met in September and approved the continued import of lion trophies from Tanzania, Zambi....

Last month, scientists warned that lion numbers in central and western Africa are likely to halve in the next two decades due to loss of habitat and prey.